What is a Chi-Square Test?

A Chi-Square test is a statistical technique to determine the relationship between two variables in a similar dataset. We can understand the concept from the following example:

Let’s assume that a researcher wants to figure out a relationship to place students in a department based on their CGPAs. He will extract random records of the department for the last five years. He will record the number of students and their CGPA, who were available for this category, i.e., below 6, 6-7, 7-8, 8-9, 9-10.

If he couldn’t find any relationship between the placement of students and their CGPA, he should equally split the students into different categories. However, if all the students in the category have a CGPA of more than 8, then the students below this score will not come under any category.

Assumptions of the Test

As the Chi test is a statistical test, it includes a few assumptions:

How to Perform the Chi-Square Test?

Follow these steps to perform the test and find the dependable variables:

In this step, you will create a contingency table indicating the distribution of both variables. Place the first variable in a row and the other variables in the column. This table will help you understand the relationship between both variables.

From the table above, we figured all the observed values. Next, we will find the expected values. For that, we need to find the Chi-Square value and identify the relationship.

According to the null hypothesis, the two variables are not dependent. Therefore, we can consider the following equation by assuming that A and B are two different, independent events:

Now we can calculate the expected value from the first cell. The first cell includes Males who exited from the bank.

Similarly, using the same equation, we can determine the results for other cells as well. Here is the result:

We can now determine the Chi-Square value by putting the calculated expected values and observed values in the table below:

The above table indicates O as the observed values and E as the expected values. Considering the Chi-Square statistic formula for the above value, we found the Chi-Square as 2.22.

Now, we can check if you should accept or reject the calculated Chi-Square with 95% confidence. The confidence is alpha, which equals 0.05. By putting the values that we figured out from the above formulas, we can find if the Chi-Square should be accepted or rejected.

You can find the value of Chi-Square using this table.

Because there is a huge difference between Observed values and Expected values, the distribution will fall to the right side. 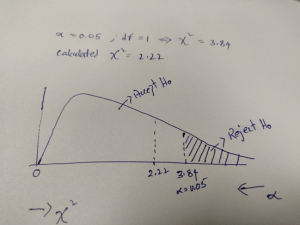 Understanding the above context about the Chi-Square test will give you a clear picture of the concept. Keep in mind that the test will help you identify the relationship between observed and estimated values. Also, it indicates if the variables are dependent or independent. However, you cannot determine why these variables are dependent and the relationship between them.

Understanding the Ins and Outs of Deep Learning

Residual Neural Networks – What You Need to Know

What is a variational autoencoder?