GRU, also referred to as Gated Recurrent Unit was introduced in 2014 for solving the common vanishing gradient problem programmers were facing. Many also consider the GRU an advanced variant of LSTM due to their similar designs and excellent results.

Gated Recurrent Units – How do they Work

As mentioned earlier, Gated Recurrent Units are an advanced variation of SRRNs (standard recurrent neural network). However, you may be wondering why GRUs are so effective. Let us find out.

GRUs use update gate and reset get for solving a standard RNN’s vanishing gradient issue. These are essentially 2 vectors that decide the type of information to be passed towards the output. What makes these vectors special is that programmers can train them to store information, especially from long ago. The diagram below demonstrates the math involved in the process:

Below, is a more detailed look at the GRU 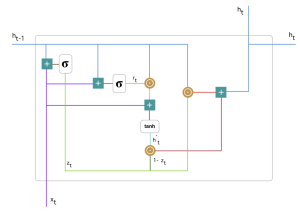 How do these GRUs Operate

Many people often wonder how Siri or Google voice search work. Well, the answer is quite simple, recurrent neural network. RNN has complicated algorithms that follow the same principles that neurons present in the human brain follow.  The RNN algorithm memorizes all of the input it has due to an internal memory that makes it ideal for any machine learning problem with chronological data.

While RNNs tend to be incredibly robust, they often face short term memory related issues. Despite being a lengthy series of data, RNN faces trouble when it comes to transferring data from older steps to newer ones. For instance, if a paragraph has been processed for completing predictions, the RNN could be at risk of leaving out significant info from the beginning.

It is also worth keeping in mind that back propagation recurrent neural network faces fading gradient problems in which gradients are values used for updating the neural system’s weight.

For those wondering, Fading gradient problems happen when the gradient tends to reduce after back propagating over time and fails to offer value in the learning process. Therefore, in registered neural networks, if the former levels gain the smallest amount of gradient, their learning process discontinues. Because these layers fail to learn, RNN does not remember anything experience in longer data series and faces short term memory issues.

LSTM and GRUs are ideal solutions for dealing with this issue.

How Does GRU Solve the Problem

As mentioned earlier, GRUs or gated current units are a variation of RNNs design. They make use of a gated process for managing and controlling automation flow between the neural network’s cells. GRUs can help facilitate catching dependencies without ignoring past information from massive chunks of sequential data.

The GRU does all of this by utilizing its gated units which help solve vanishing/exploding gradient problems often found in traditional registered neural networks. These gates are helpful for controlling any information to be maintained or discarded for each step. It is also worth keeping in mind that gated recurrent units make use of reset and update gates. Here is a look at them.

The main function of the update gate is to determine the ideal amount of earlier info that is important for the future. One of the main reasons why this function is so important is that the model can copy every single past detail to eliminate fading gradient issue.

The Function of Reset Gate

A major reason why reset gate is vital because it determines how much information should be ignored. It would be fair to compare reset gate to LSTM’s forget gate because it tends to classify unrelated data, followed by getting the model to ignore and proceed without it.

What Makes GRU different from LSTM

LSTM, which many people also refer to as long short term memory, happens to be an artificial architecture of RNN, often used in deep learning. Long short term memory networks tend to be quite suitable for making forecasts, classifying and processing on the basis of time string data. This is because there is always a chance of having gaps in unidentified periods within vital events present in time strings.

Gated recurrent units were introduced in 2014 for solving gradient problems that RNNs faced. GRU and LSTM share multiple properties. For instance, both of these algorithms utilize a gating method for managing memorization procedures. That being said, GRUs are not as complex as LSTMs and computing them does not take too much time.

While there are several differences between LSTM and GRU, the main one is that long short term memory has three input gates, namely: forget, output and input. On the other hand, there are only 2 gates present in GRU, and they are: update and reset. In addition, GRUs are not overly intricate and the main reason behind that is the lower number of gates compared to LSTM.

Why GRUs are Superior

GRUs are considered far superior compared to LSTMs because modifying them is relatively straightforward as they do not require memory units This also makes the training process for GRUs far quicker then LSTMs. GRUs are often relied upon when there is a small series of data. However, when there is a large data series, LSTMs are the preferred choice.

Gated Recurrent Units are a vital part of the data science landscape and learning about them is vital to ensure you can use them appropriately. Because of their ability to solve the vanishing gradient problem, GRUs have proven to be a godsend in the data science world and programmers are training and properly utilizing them for complicated scenarios.

What is Transfer Learning

What is Light GBM?